Vegan sources of B12 vitamins

Vegan sources of B12 from Lovebee

You need B12 to maintain a healthy body. These vegan b12 sources will help make sure your reserves never run low.

A vegan food boasts a long list of benefits, but there’s one key micronutrient you may be missing out on B12. Here’s the lowdown on vegan B-12 sources, along with tips on how to make sure you’re getting enough.

It’s one of the most important micronutrients on the face of the planet, involved in the metabolism of every single cell in your body.

If we don’t actively stay on top of our B12 consumption, it turns out a deficiency is a very real threat.

There’s still plenty of things you can do to stay on top of your vegan B12 and remain a healthy herbivore. Today we’re going to explore how to get B12 as a vegan, and some of the best natural sources.

Vegan sources of vitamin B12:

What is vitamin B12?

Where does B12 come from?

The most common dietary sources of B12 consumed around the world are animal products such as meat, dairy, seafood, and eggs. Many people don’t realize that B12 is actually synthesized by certain bacteria and archaea.

We humans actually produce our own B12 from bacteria in the colon, but in a cruel twist of fate, it’s too far down in the digestive tract for us to absorb any!

How much B12 do we actually need?

It’s a super common question – how much vitamin B12 per day do we actually need? The current recommendations from the National Institute of Health are as follows

The values above are based in the USDA daily guidelines. However, in 2015, the European Food Safety Authority established a new ‘adequate intake’ of 4μg (microgram) per day for the general population.

In short – make sure you’re getting enough B12 through your diet or supplements, and be sure to go to a doctor and get tested if you suspect you may be running low.

Vitamin B12 is involved with a long list of important chemical and metabolic processes in the body – red blood cell production, DNA synthesis, nervous system function, and energy metabolism just to name a few.

Maintaining adequate B12 levels also helps to prevent anemia (a lack of healthy red blood cells) and various neurological issues – both of which can have serious health implications.

As we touched on above, vegans need to pay particular attention to their B12 levels because the micronutrient is mainly found in animal foods.

Vegan B12 deficiency and symptoms:

We don’t think if you follow a plant-based food, it makes sense to be a little concerned about getting enough B12. After all, B12 is one of the most common vegan vitamin deficiencies. But it’s not just herbivores who should be mindful of their intake.

According to The National Institute of Health, older people, those with atrophic gastritis (thinning of the stomach lining), pernicious anemia, and other gut issues like Crohn’s and Celiac disease may also be at an increased risk.

Some of the key signs and symptoms of a B12 deficiency to look out for may include:

In terms of fully vegan B12 sources, B12 fortified foods are widely regarded as being the most reliable.

Interestingly, a study in 2000 found that vitamin B12 from fortified foods was actually linked with a better B12 status than B12 intake from animal products.

Researchers hypothesized that the B12 in meat and dairy might actually be damaged during cooking, whereas the form used in fortified foods tends to be more stable with heat.

With that in mind, some of the best include:

Nutritional yeast is a vegan’s secret weapon, great for sprinkling over salads or crafting vegan cheese alternatives. One thing to note:

Although fortified yeast is a super dense B12 source, it may be wise to diversify your B12 sources (as opposed to just relying on this one). B12 is light sensitive, so if you get your nutritional yeast from clear plastic containers like those found in Wholefoods, the micronutrient may degrade and the actual values may be lower than usual.

You either love or hate it. Regardless, it may be worth experimenting with marmite or other yeast spreads from time to time if you’re looking to keep your B12 levels in check. They don’t provide a whole load of bang for their buck, but every little helps.

Fortified milk substitutes are a super convenient way to keep on top of your B12 levels. Some of the best sources include:

Whenever possible, go organic and double-check the label to confirm it is actually fortified with B12.

Many plant-based types of meat are a great source of B12 – including the B12 Burger made by British brand Moving Mountains. Again, not all plant-based meat alternatives are fortified, so remember to check the nutrient labels.

You can stay on top of your B12 from the get-go by adding fortified cereals to your breakfast meal prep. Some of the richest sources on supermarket shelves include:

When it comes to vegan sources of vitamin B12, it’s widely agreed upon by medical and nutritional professionals that the most reliable are B12 fortified foods and supplements.

While there are some natural plant sources of B12 (and some with relatively high concentrations), unfortunately, the evidence is not yet strong enough for you to rely on them solely.

So it’s important to take the following vitamin B12 vegan foods with a pinch of salt, and avoid relying on them as your sole source.

Fermented foods are becoming increasingly popular because of the potential benefits when it comes to digestive health and the gut biome. On top of that, they may also be a source of vegan B12 – particularly tempeh, or fermented soybeans.

Interestingly, the soybeans themselves do not contain B12, but it’s actually generated during the fermenting process.

Lactobacillus bacteria is a bacteria commonly found in fermented foods which have been shown to produce some B12, but there’s yet to be enough hard evidence to suggest it is a reliable source.

This is also the case with Kimchi – a Korean dish of fermented cabbage. One study calculated 0.18-0.24mcg of B12 per 100g, but this is not necessarily representative of all store-bought varieties.

Algae like chlorella and spirulina are often brought up when it comes to natural sources of B12.

While there is some good evidence to suggest chlorella can contain some B12 precursors and may be a viable option, most of the evidence shows that spirulina is NOT a reliable source (and may even negatively impact B12 levels).

Nori is a great source of iodine, another micronutrient that vegans and vegetarians sometimes need to be aware of.

When it comes to B12, evidence suggests that raw nori could be a viable source. Interestingly, when nori is cooked or dried, it seems the B12 levels deteriorate. Like spirulina, we start to see high amounts of ‘pseudo-vitamin B12’, which may actually negatively impact B12 levels.

There is some evidence to suggest that certain types of mushrooms may contain active B12. One such ‘shroom is the Cremini.

Some sources suggest that 100 grams of mushrooms can contain up to 26 micrograms of vitamin B12, but experts warn that they should not be relied upon as a primary source.

Is Organic Food a Source of Vegan B12?

Some proponents of plant-based food argue that organic, unwashed fresh produce is a natural source of B12. Is there any merit to this?

While bacteria in the soil can produce B12, and opting for organic food is in many ways better than non-organic, the evidence that we can get all the B12 we need from dirty vegetables isn’t all that convincing.

So by all means buy organic food when possible or opt for an organic vegan meal delivery service, but keep on top of your fortified foods and/or supplements as well. 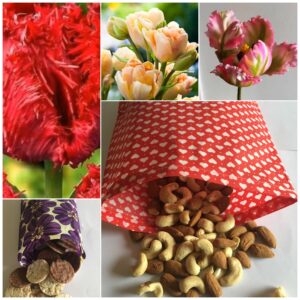 Sustainable, natural alternative to plastic wrap, and sandwich bags. Cover a bowl or a jar, pack a snack, wrap up cheese, fruit, vegetables, cookies, sandwiches or even your dog treats. Use as a place mat, or bundle up hiking and backpacking tools, utensils, and toiletries for a zero waste camping.